Recent releases (Witness 1 & 2) and performances have made increasing use of generative composition tools that I have developed using Cycling74 Max/MSP combined with homemade Kontakt instruments.

These ‘Engines’ connect directly to live data feeds and process the incoming datastream into sound. They offer new perspectives, and connect us to environmental change and solastalgia through our familiar, instinctive sense of musicality. 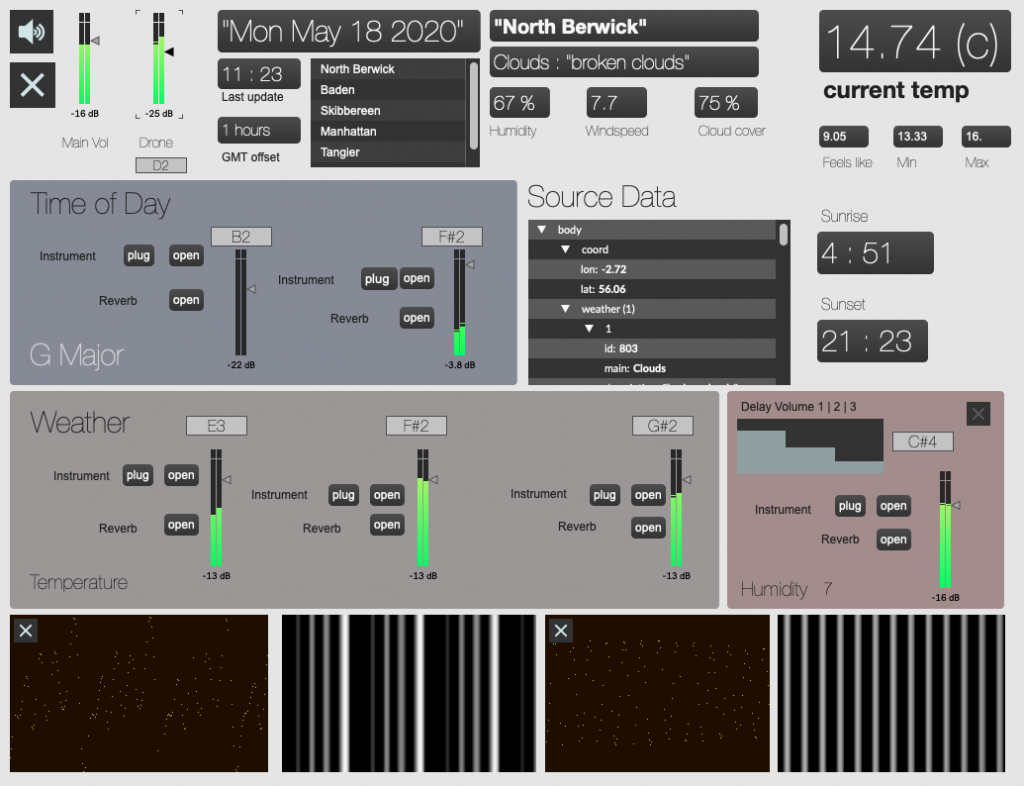 Using data from OpenWeatherMap, the Weather Engine reports on live conditions in a variety of locations around the planet. The musical key is defined by the local time of day, while the temperature and degree of cloud cover control the range of notes available to the engine. Wind speed informs the tempo, while humidity levels guide the percussive elements of the unfolding composition.

The Weather Engine provides all of the musical content for the recording, Witness 2. 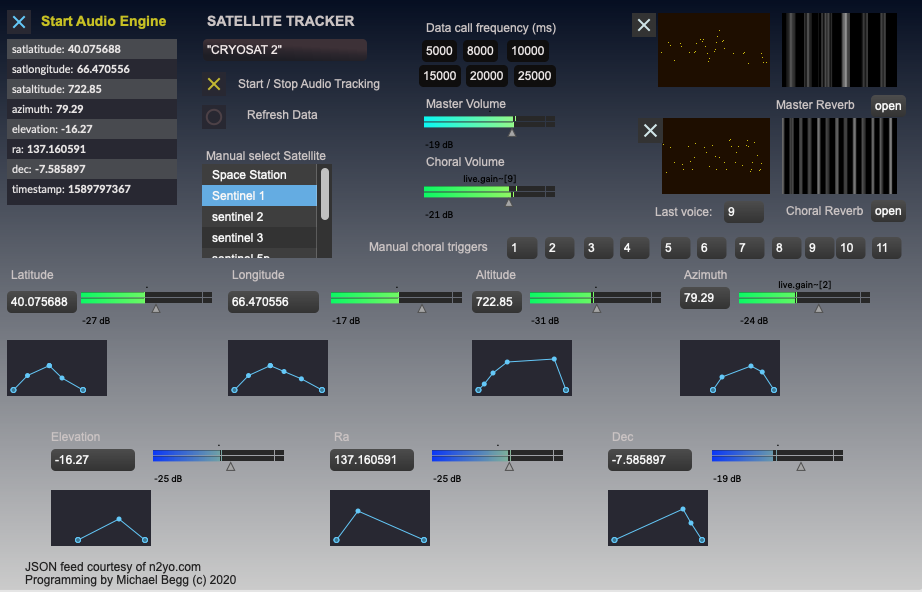 In its current configuration, the Satellite Engine draws on live positional data provided by N2YO and tracks a number of satellites in real time, including the International Space Station, Cryosat 2 and several member’s of the European Space Agency’s Copernicus Programme Sentinel family.

A number of frequency generators and filters process information relating to latitude, longitude, altitude, azimuth, and other positional data to create rich Ligeti-like harmonic clusters which alter in pitch and timbre as the signal moves from satellite to satellite. The connection between us and these otherwise silent presences above our heads is further enhanced with the addition of vocal harmony clusters composed by Clodagh Simonds, which automatically trigger when certain conditions in the data stream are observed.

The Satellite Engine has been live-streamed on Youtube for 5 – 6 hour periods during its development, and these streams have been archived on the Omnempathy Youtube channel.

Live broadcast of the satellites also contributed to live performance by the Black Glass Ensemble, in a work called The Alchemists, which was subsequently broadcast on BBC Radio 3’s Unclassified.

In development: The Air Quality Engine

Working with realtime data harvested from OpenAQ’s worldwide collation and archiving of air quality monitoring datafeeds, the AQ Engine will present a persistent audio representation of the air quality at key international locations.

The first sounding of the AQ Engine took place on the night of May 19th 2020. This is the sound of the clean air in Edinburgh, Scotland in the middle of the Covid lockdown

From 16 possible musical scales available to the engine, the reading has triggered the Bi Yu scale, from the group of Chinese scales.

The Engines can be adapted and customised to local requirements for installation and exhibition. Contact me for further detail.